Disturbing: WSJ – “Rise of the Warrior Cop”. Erosion of Our Society. 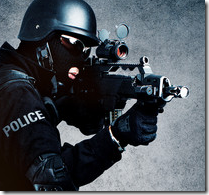 In line with my previous post, now the Wall Street Journal weighs in (WSJ article)…   and this is disturbing.

It seems that we as a society are gradually moving away from our foundation and principles: respect for individual liberties, innocent until proven guilty, etc.  Heard a thought this weekend (Yuri? dad?) that our government is gradually eroding our rights and liberties in the name of convenience.  And now we’ve ended up with a situation when Manning (Wikipedia) and Snowden (Wikipedia) were able to access incredibly important information (ridiculous in itself if it’s “so secret!”), the government has been able to put Weev (Wikipedia) into prison, and there are numerous other transgressions, which we don’t realize until we’ve come face to face with it.

And when the system does work as it should and we don’t “like” the outcome, we seem to fail to appreciate the importance of the system.  Case in point: the Zimmerman trial.

We need to take a step back and consider the ideas upon which America has been founded.  Not to suggest that he was one of the Founding Fathers, but Voltaire comes to mind: “I disapprove of what you say, but I will defend to the death your right to say it”.  For some reason, this quote seems even more powerful than “life, liberty, and pursuit of happiness” in The Declaration of Independence.

What can be done about this?  Hold on…  Working on it.  In the meantime, the more discussions I have on this subject, the more I am leaning towards increasing transparency and accountability.  The system is there to serve us.  It doesn’t do it well sometimes.  We should be able to fix this.