Allow Me to Reintroduce Myself… I am your Director. 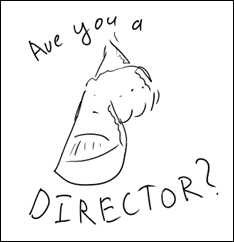 Chances are, you are in the loop about the joke of an attempt at a shareholder meeting that happened recently.  Well I received shortly thereafter, by snail-mail, the so-called “meeting minutes” (not linking to the docs yet due to a colleague having been caught in the crossfire).  I promptly responded with a polite, but firmly righteous outrage over the whole thing.

So what does all this mean?

Well, for one I remain a director of the Corporation. Why?

First off, any attempt by Klaus and Moshe to freeze me out is a violation of their fiduciary duty to me as partners in a close corporation, thereby making it illegal.

And even if, arguendo, we assume that I only had one vote because I am a dunce who would allow Myers to vote for me, then we still have three directors with votes of 2,2,1.  Which means that, any way you spin it, there are three directors. All of this “arguendo”, of course…

So what does that mean, “arguendo” or otherwise?  Well, a number of things…  but I won’t discuss them just yet…  in the meantime, about directors (sorry, in Russian) 🙂