Bernstein vs. Pritsker. Hearing on Bernstein’s Motion for Summary Judgment and Motion to Dismiss. 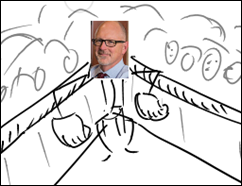 The hearing for my lawsuit with Moshe regarding access to books and records of the Corporation will be on May 29th, 2013 at 2pm in room 610 at the Middlesex Superior Court in Woburn.  For those interested, the docket number is MICV2012-03183C, although I doubt that it will be available to the public before the hearing, since the judge may have the docket for review.  If you’d like access, just ping me and I’ll make the documents available.

Anyway, let’s give this a shot in the spirit of fighting commentators.  The following is to be read out loud… fast… with expression:

And we’re back! Bernstein vs. Pritsker continues.  Synopsis:

Pritsker colluded with Korak to freeze out Bernstein.  Bernstein sought to get access to books and records of the Corporation in accordance with M.G.L. Chapter 156D Section 16.02, but was denied and filed a lawsuit. Pritsker countersued. And off we went!  This is not, we repeat, this is NOT a derivative suit, but who knows how it could turn!

In one corner, a $400 an hour Attorney Thomas Fitzpatrick, president of Davis Malm & D’Agostine.  He knows the law, he’s litigated before, what’s more, what’s more: sharp gaze, level voice, Napoleonic posture – don’t look him in the eye if you don’t want no trouble, son.  Fitzpatrick claims to represent the Corporaiton, but is he?  We hear that he actually represents the interests of Moshe Pritsker and Klaus Korak, who hired Fitzpatrick with company funds to help freeze out their opponent…  Isn’t that a violation of his fiduciary duties?  So the opponent alleges!  Let’s give a big hand to an all-time favorite professional attorney: Tho-o-o-o-o-omas Fi-i-i-itzpa-a-a-atrick!!!!!!

In the other corner, Nikita Bernstein, representing himself – JoVE co-founder and, until September 30th, 2011, an undisputed Chief Technology Officer, Director, Stockholder, and partner at MyJoVE Corporation, a closely-held corporation.  He alleges that he got frozen out, kicked out, barred from management, barred from monitoring, barred from providing feedback, and just generally barred.  He has no legal experience, got quite some smacking around by the legal system thus far, but claims to have an unfair advantage over his adversaries: truth and justice.  Give a big hand to the pro se litigant, Niki-i-i-i-i-ita Bernste-e-e-e-ein!!!!!!

You thought Game of Thrones was drama?  Please.

Anyway, this will be interesting.  I am preparing.  Some things that might come up:

I’ll post a brief history of what had happened sometime later.  In the meantime, if you have any advice, let me know or contribute to www.wiki-law.com.  You can also contribute here.

While the situation from my vantage points looks pretty simple, be careful about conclusions.  If there is one thing that Hilary and Jackie demonstrates, it’s that one can be really wrong when jumping to conclusions.  That said, until I see evidence that shows otherwise, I am assuming foul play, still…  still, I am very curious to understand Moshe’s vantage point and whether there is an explanation for all this.

One response to “Bernstein vs. Pritsker. Hearing on Bernstein’s Motion for Summary Judgment and Motion to Dismiss.”